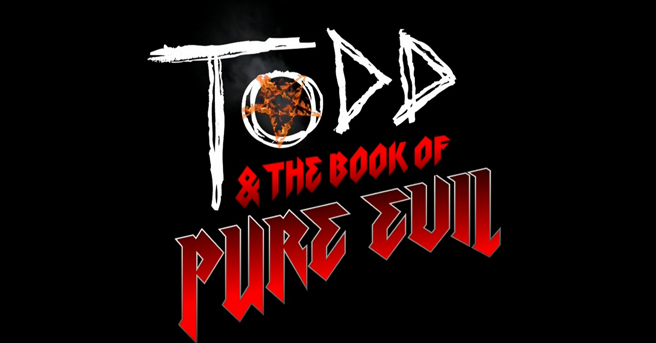 TODD & THE BOOK OF PURE EVIL is fucking awesome. I discovered this cult Canadian horror-comedy series while browsing Netflix with friends, looking for something to make fun of, and this sounded cheesy. But, while cheesy, it was also really funny, clever, and really got across - better than most things - how it is to grow up as a nerdy metal-head in high school. While Todd was a bit more into thrash than I was, I saw a lot of myself in him, which I don't do in most teen shows. Even his best friend Curtis reminded me of my friend growing up. Either way, I ended up staying awake all night binging the whole series.

However, due to budget and its niche cult status, the show only lasted two seasons, ending on an intense cliffhanger. Because, besides being funny and gross (the horror aspects of the horror-comedy would often get gory and gruesome), it also had characters that grew, changed, and that gained multiple dimensions during the run. So it was devastating to leave on such an open-ended note.

But no longer! The long-anticipated (to fans anyway) animated feature film is here! And while the trailer is above, here's the official synopsis below:

Continuing where the critically acclaimed cult TV series left off, Todd & The Book of Pure Evil: The End of The End: The Animated Feature (or TATBOPE: TEOTE: TAFF for short) returns to Crowley Heights to find Todd, Jenny and Curtis grieving the loss of their dear friend Hannah. Her death may or may not have been caused by Todd's banishing of the Book. The three must reunite to fight evil when the Book of Pure Evil returns to Crowley High. It brings with it some familiar faces as well as some new foes, such as the Sweater Vest Beast and an Acidic Acne-faced Teen. But, these enemies are merely warm-ups to the final battle with their greatest nemesis yet, The New Pure Evil One. His intimate knowledge of our heroes may ultimately lead to their destruction!