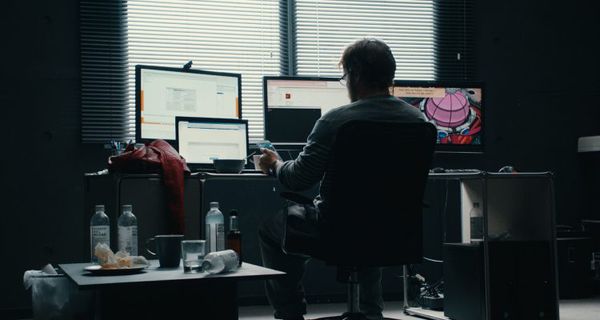 A Young Man With High Potential

It's a phrase we've all encountered in coverage of rape trials. A man with high potential, the argument goes, should not be treated too harshly for a single mistake. These are tragic situations; they are victims too. Imagine what a lengthy prison sentence could cost all of us. (The thwarted potential of women rarely enters the discussion.) Naturally, such arguments polarise opinion. Linus de Paoli's quietly devastating film, which he developed with his wife Anna, sets out to make viewers uncomfortable no matter what they think.

Piet (Adam Ild Rohweder) is the sort of guy who has social experience with women. Nerdy and focused on this work with computers, he doesn't really expect them to take an interest in him, on any level. When he is advised to partner with Klara (Paulina Galazka) on , he initially resists. To their mutual surprise, however, the two bond, and she gradually brings him out of his shell. What she doesn't is how overwhelming this is for him. When one night, he kisses her and she pulls away, explaining that she doesn't think of him in that way, he's devastated. What he does next seems, on one hand, like a logical progression; on the other, like something so far removed from human feeling that there's no moral or psychological point of return.

The genius of the film lies in the way it balances this. De Paoli uses a bagful of cinematic tricks to make viewers identify with Piet at his worst and, for some time, keeps us willing him to step back from the brink. That what he has set out to do doesn't live up to his own expectations the gulf between his beliefs about himself and and the degree to which he's sacrificing his own emotional connection with the world, deliberately submerging his feelings until he can't recover them. Does this make him tragic, sympathetic? Yes, but pathetic at the same time - and because he can see the horror in the situation, it's impossible for viewers to lose sight of it.
Later, when Piet is dealing with the consequences of his actions, we watch one thing after another going wrong, almost to the point of farce, and everything that cinema has taught us makes us will him to get away with it, invites us to become complicit. This is comedy at its most bleak - laughter emerges as a coping mechanism. De Paoli uses this to align us with the other characters who, wittingly or otherwise, participate in Piet's attempt at a cover-up. There's a strong desire to have all these troubles go away, to have things go back to normal - except, of course, that's impossible for Klara.

Galazka's early scenes are pivotal, showing us Klara's wit and warmth and youthful clumsiness. She's thoughtless sometimes and capable of being mean when she's angry, but no more so than Piet. She's smart and funny and full of potential. De Paoli shows her in warm light, in a shiny red jacket; when Piet is alone, his world is a patchwork of shadowy blues and greys bookended with stark, clinical white. The glimpses we get of Piet's social life, meanwhile, reveal that he is capable of lasting friendship when he doesn't let sexual feelings get in the way, and his geekiness acts as a reminder that toxic masculinity isn't limited to the preppy trust fund boys who more commonly comprise cinema's young monsters.

Skilled in illustrating emptiness and disappointment without letting the tension slacken for an instant, De Paoli has created a film that lives up to its potential and is powerful in its own right as well as being a strong contribution to the cultural conversation. A supporting turn from Vania Bajdarova as a smartly dressed investigator with Columbo-like powers of insight adds an additional layer of complexity to the final scene. There are no easy solutions here, and nobody - least of all the audience - should expect to sleep easily .