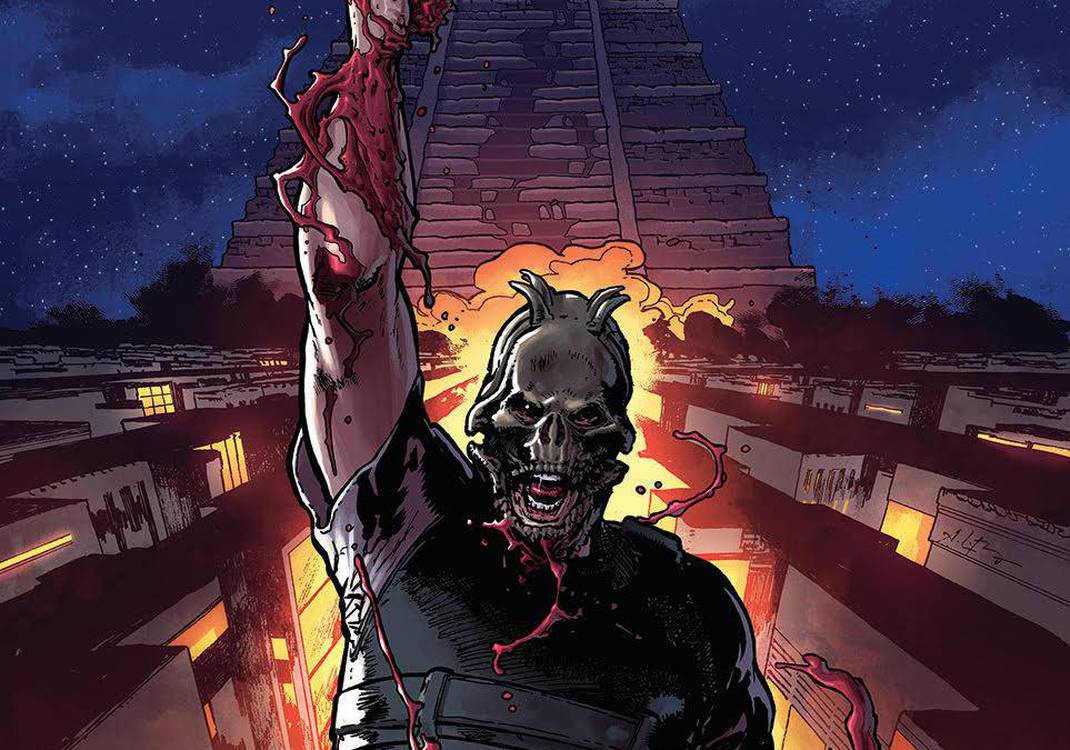 The career of Brazilian filmmaker Armando Fonseca , from Infravermelho Filmes , may be very close to a sudden change of course. This is because the director, alongside colleague Kapel Furman , is currently finishing the first cut of Skull - The Mask of Anhangá , a Brazilian film funded by the Texan company Cinestate. The brand also owns Fangoria magazine, the largest horror film publication in the United States.Fonseca and Furman are already known within the national genre production for their short films and the Desalmados project, which they have been trying to get off the ground for years. In addition, alongside Raphael Borghi, they present the Universal Channel 's Cinelab program, a reality show about practical visual effects. The duo also directed the feature film A Percepção do Fear (2016), which tells the story of a man who becomes a psychopath when repressed by the society in which he lives.

Skull - The Mask of Anhangá is financed by producer Dallas Sonnier, who learned of the idea after a presentation by the directors at the first edition of Fantasmercado , an event at the Fantastic Film Festival of Porto Alegre ( Fantaspoa ) aimed at promoting Latin American film productions in May last year. If all goes well, the film should be released soon by the Fangoria label and circulate the world through specialized festivals.

Fonseca granted, by telephone, an exclusive interview to Escotilha , in which he told a little about the expectations for the new feature and commented on the progress of new projects. Read below:

Hatch »How are the preparations for Skull - The Mask of Anhangá going ?

Armando Fonseca » We are very excited. Skull started as a project a few years ago. It is a character that we had already used in Cinelab , always as a serial killer . Then we set up a background , explaining where it came from. We were able to present it in the first year of Fantasmercado, in Fantaspoa, and it even reached Cinestate's Dallas Sonnier. Right now, we are editing and closing a cut to be able to show it to producers in the United States.

The project went quickly, considering that Fantasmercado was in May last year…

Let's have a cut ready before having the next Fantaspoa [laughs]. We want to close our share until August. And then we'll send it to Dallas. He is a guy who has already produced a lot and manages to put the film in several festivals.

Any story that has a touch of the supernatural can provoke curiosity. I find it easy to fit the stories I create in horror. We also have the know-how of how to produce it cheaply.

And what is the film about?

We wanted to create a mystique so that it was something here. Skull is an envoy of an entity called Tahawantynsupay , who wants to incarnate on earth and uses certain elements for that. In this case, it is a mask, which, when activated, incarnates in a murderer who begins to make sacrifices in order to bring this tynsumpay to earth. The plot takes place in the modern world, with Skull incarnate and giving work to the police [laughs].

I saw that they are describing the film as an “action slasher”, mixing different genres…

So, we have our references. Personally, I like a lot of these hit movies, like Adrenalina (2006). I also like Madrugada dos Mortos (2004) and Extermínio (2002), which are fast and not that heavy terror. People seem to want more and more fast-paced films and this is a trend we are following. The next film that we will shoot at the end of the year is a suspense drama, with supernatural aspects and an infection of monsters.

What project is this?

We are planning to shoot the feature film The Last Pit . There are already people capturing [resources] and the idea is to film the entire story. We used two acts from this script to make a short film and a comic book. In the feature film, everything will be bigger.

I had the opportunity to check out the comics and the short film and I really liked it. Where does this idea of producing narratives that complement each other through different media come from?

Personally, I mirror a lot of what I want to do in the things I like to consume for fun. I really like these things about buying a spiderman doll, besides having the comic and the movie. So we thought: “why not do this with our own productions?”. You can tell a story that happened outside the comic book, make an action figure and even a short story for a book. That's what Kapel did with Cidade Cadáver , one of our feature films.

Taking advantage of the mention of Kapel, the presence of his character from Desalmados in the short film A Ultima Cova indicates that they are building a shared universe set in a Brazilian zombie apocalypse.

That is it. I really like Kevin Smith, who makes films of different genres, but in that universe of characters who live, know and relate. We thought about putting Kapel there to have a connection with what we've already done. Marvel's doing it in the movies right now, but they've been doing it in the comics for 60 years. We have three projects set in this same universe: The Last Cave , Três Bares and Desalmados.

And how is the progress of these other productions, especially Desalmados, which is an old project by Infravermelho?

The Last Pit is the one that is most forwarded. Desalmados is a project that helped make our booklet. A lot came from there and the proposal did not disappear. One hour we'll do it [laughs].

His films rely on zombie narratives, which seem to be a subgenre that is overexploited in horror. Is there still room for novelty in this type of production?

I really like the zombie and undead theme. I feel that you can have different levels in the plots and you can tell very interesting stories. Zombies have been around since the sixties and got beaten up by The Walking Dead . They even advertised Coca-Cola with zombies, which was unimaginable ten years ago. But you can still play with it a lot, making horror, action and drama films.

Infrared films also seem very interested in this presence of the supernatural ...

Any story that has a touch of the supernatural can provoke curiosity. I find it easy to fit the stories I create in horror. We also have the know-how of how to produce it cheaply. We are not going to crack our heads to place a submarine in the future. We think about what can be created and we add special effects, which help to give production value.

And when will the public be able to see The Perception of Fear?

Look, a lot of people make films in Brazil that stay put because they simply have nowhere to show, you know? Perception of Fear ran for some years through festivals. In the same year that he spent in Asia, Mexico and a lot of other places, he was ignored by several shows here. After he won awards, he was very well accepted here. The film was shown on [closed channel] Space and has a future. We even have a new partnership to stream.

I find the narrative of the film very interesting and crazy ...

Yeah [laughs]. In fact, we wanted to tell the story in three cities. It would be a film directed by me, Kapel and [filmmaker] Gurcius [Gewdner]. It turned out that the Gurcius section got so big, that he made his own film. Then we put our two stories together, one in Brasília and the other in São Paulo. I heard many reviews that said it was a Taxi Driver film (1976), about a guy who is going crazy and starts to see some monsters and start taking medicine. This is a good case to analyze the audience's perception of a film...

What are the plans for the producer now?

Skull has no release date because Dallas will decide when to launch. The film is his. We just produced it. On the carriage floor, we will run The Last Pit and then the Escape Area . It can all blow up in my face. Every year we are in the mood to produce a film, but then end up producing another [laughs].