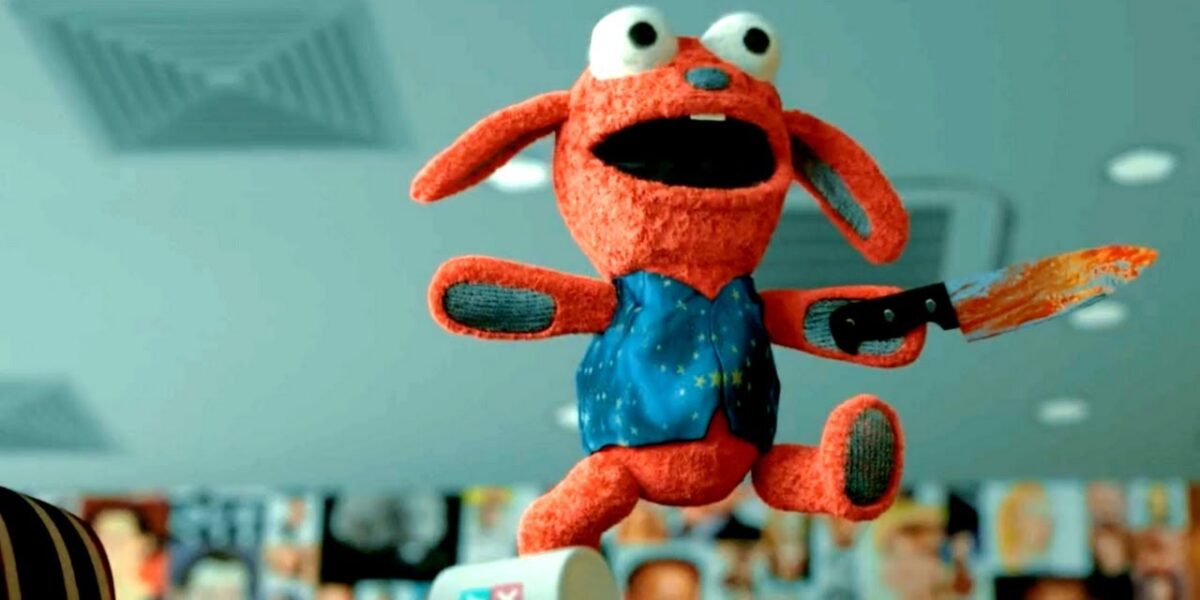 The oldest possession I own is a stuffed Winnie-the-Pooh bear, which I’ve had since I was 3 years old. I’ve kept it with me throughout my life and I’ve made sure that it doesn’t get lost, or I don’t throw it away. However, after seeing Benny Loves You, I will now take even more care in making sure it doesn’t get thrown away!

Benny Loves You is written and directed by newcomer Karl Holt. Based on his 2006 short, the film follows Jack (played by – you guessed it – Karl Holt), a man who can’t let go of his past and childhood and has found himself in the near bottom of the barrel after his parents die. However, his luck is about to get worse after he throws away his childhood favourite bear Benny.

Because Benny has come to life and will kill anyone who dares show affection for his best friend.

Not only has this film introduced the horror genre to the most adorable psychopath ever, but it’s also become my favourite film of this year’s Frightfest. And, as of writing, it has just won Frightfest’s First Blood Best Film Award, which it definitely deserves.

The first aspect to mention is the film’s humour. It’s a British film and embraces that by bringing in dry and, at times, dark humour. If the film were to be compared to anything, it would be 2007’s ‘Hot Fuzz’, with two specific police characters looking as if they stepped off Edgar Wright’s set and straight into this one. It would’ve come as no surprise if one of the film’s influences was Hot Fuzz.

As well as the dry humour, it has a lot of visual gags too, mainly from the consequences of Benny’s actions. The cuddly toy effortlessly brings in visual jokes either by the way it moves or the way it acts; the fact that the film doesn’t make Benny walk around like a human, but more like a puppet on strings is a smart decision. Not only does it further the absurdity of the plot, but it brings a sense of charm to the cuddly killer. Over all, all the jokes and dialogue land beautifully, and it is laugh-out-loud hilarious.

Like previously mentioned, Benny Loves You has introduced the horror genre to an adorable killer in Benny the Bear. Benny is also voiced by Holt and he brings the knife-wielding kills to the film in gruesomely gory fashion. And, while the CGI looks obvious during some scenes with the Bear, it works to the film’s advantage by almost giving it a cartoonish feel. The kills are fun, and the build ups to them are tense and, for one scene, funny. However, Benny gives the film its charm; by making the killer a cuddly toy bear, Benny can’t help but be adorable (even when he’s slashing someone!). His charming smile, plus his Elmo-like voice makes him a character that oozes cuteness as well as craziness.

The relationship between Jack and Benny brings in a moral dilemma: what if a childhood toy of yours came to life and started murdering people? Would you want to destroy it, or would you be too attached to it to do so? It’s a dilemma that Jack definitely faces. And, while he mostly tries to stop his childhood toy, there are moments where he uses Benny murderous mindset to his advantage to try and better himself, which comes across as oddly charming.

While Benny Loves You is mainly focused on Benny and Jack, the film comfortably shines a spotlight on the rest of the supporting cast too. Love interest Dawn (Claire Cartwright) and co-worker Richard (George Collie) are part of the main cast and are all given moments to inject humour into the film, or to help further the plot. None of the characters are shoe-horned in; they all have a reason for being there (even if their only purpose is to meet the edge of Benny’s knife!).

Over all, Benny Loves You is a delightful and wonderfully gruesome film that the horror genre needed. The film is perfectly paced, with each of the main cast being given their own time to shine, and the kills are satisfying and, at times, hilarious. The film’s dry humour works beautifully against the absurd plot, and Benny brings an odd sense of charm to the film. Fans of Child’s Play and Hot Fuzz will find something to enjoy here in this messed up Toy Story-esque tale!