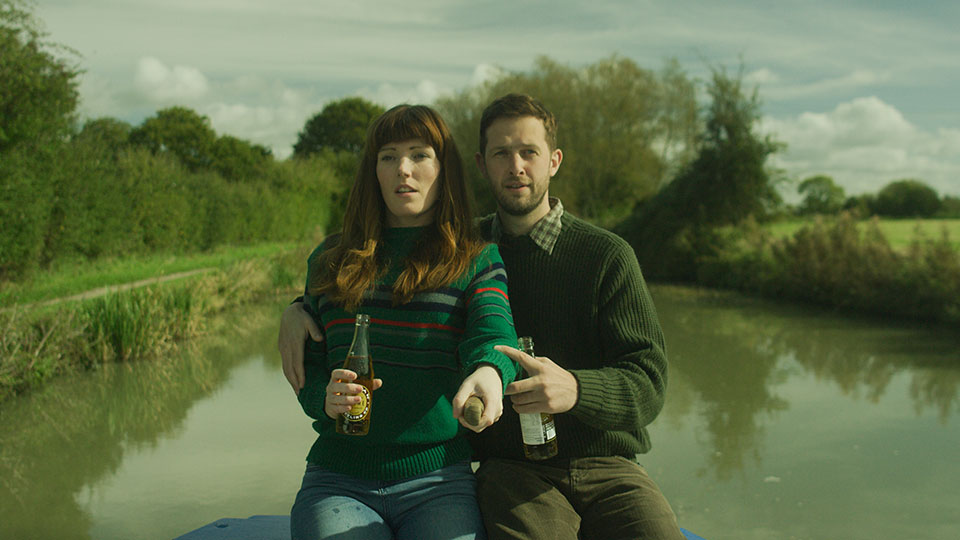 Kat (Kate Davies-Speak) and her sister Sophie (Natalie Martins) decide to take their boyfriends on a barge holiday following the death of their mother. Hoping that the weekend will be a relaxing one and bring them and their partners closer together, the sisters realise their weekend is on the risk of being derailed after a run-in with some aggressive locals. As tensions with the locals rise, the group finds they have bigger threats to deal with when they are attacked by flesh-eating fish mutants.

The Barge People is the latest film from director Charlie Steeds (Escape from Cannibal Farm) and it was written by Christopher Lombard, who makes his feature film debut. Paying homage to a whole host of classic horror films, The Barge People is an incredibly effective, very intense and wholly satisfying cinematic experience. After taking a little time to introduce the characters and establish the premise, always with an unnerving undercurrent running through, The Barge People delivers one of the longest and most intense scenes of violence I’ve seen in a long time, and it’s a pure adrenaline ride.I’m pretty sure there was a whole minute or two where the action was so intense, I barely breathed. Whilst difficult to watch at times, it’s incredibly impressive and shows that independent films can compete with those from larger studios when they have quality talent involved. The flesh-eating fish mutants are terrifying and director Steeds uses them to maximum chilling effect throughout the film. Lombard’s script delivers endless twists and turns, and I found myself shouting at the screen several times as well as declaring that I knew what twist was coming next, only to be blind-sided by something completely different.The film’s practical effects are wonderful, as are the make-up and costumes. The fish mutants look a little like The Flukeman from the classic episode of The X-Files, The Host, but they’re even scarier and whole lot more bloodthirsty. In the scenes where the actors are in peril, I actually could see the fear on their faces, convincing me that maybe they were actually terrified to be acting against these horrific-looking creatures.The cast is mostly excellent too. Katie Davies-Speak is far and away the strongest actor here and she puts in a tour-de-force performance. She has the ability to be steely when she needs to be but she also is very good at bringing the emotions of Kat to the fore. Mark McKirdy as Kat’s boyfriend Mark is also strong, and he has some nice little moments in the aftermath of the attack on the barge. Makenna Guyler who plays Jade, one of the locals that is initially an antagonist to the core group, takes her character on quite the journey too, and she shows some real grit in the film’s second half.The Barge People is without a doubt one of the most thrilling horrors I’ve seen in a long time and certainly one of the best British horror films for years. I was hooked from start to finish and so deeply impressed by this modern take on the classic monster movie. Part stalk-and-slash, part creature feature, The Barge People is never dull and I couldn’t take my eyes off the screen. It looks fantastic, the script and direction are strong, the cast is great and the scares come thick-and-fast. What more could you want from a horror movie?