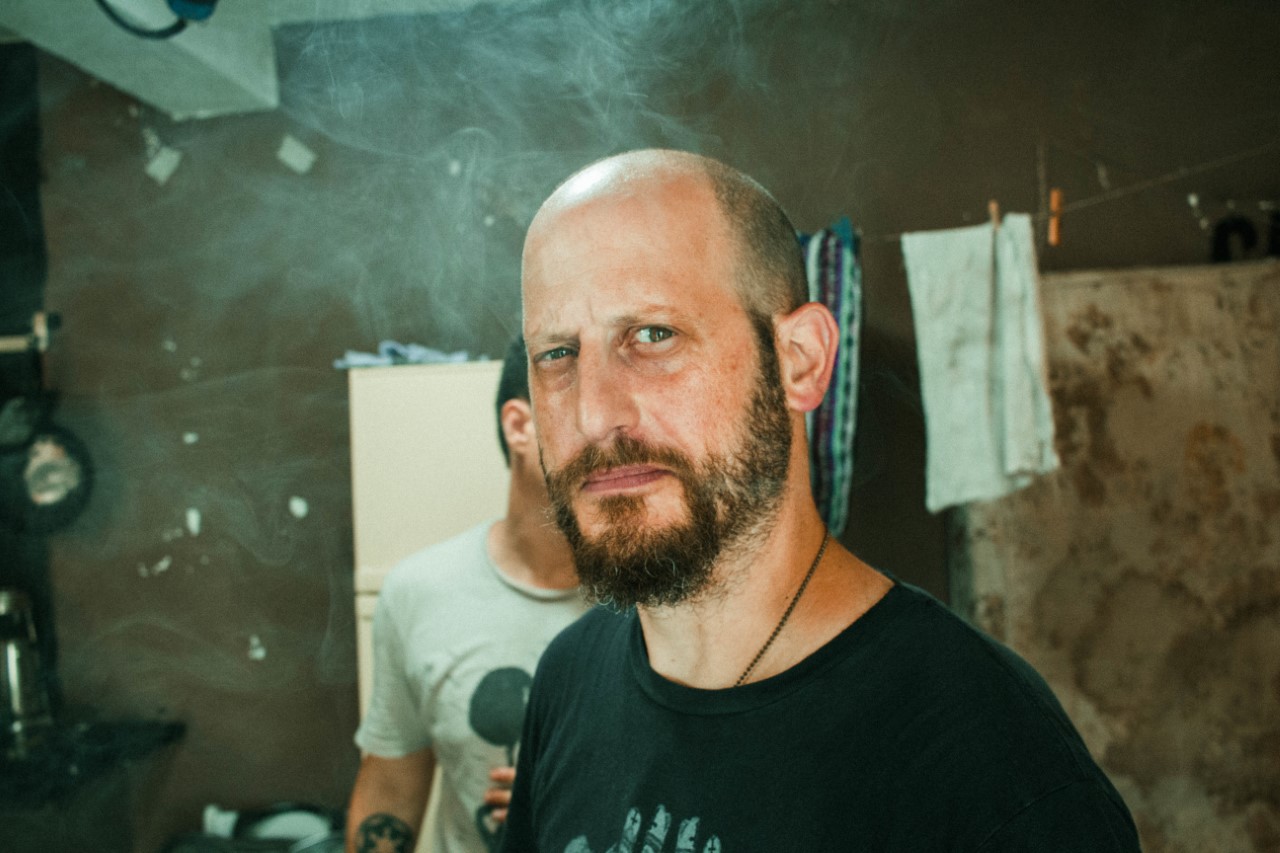 Interview with Kapel Furman, co-director and SFX master on Skull: The Mask

FrightFest always tries to show the very best from around the globe and one of the stand out titles for 2020 is Skull: The Mask from directors Armando Fonseca and Kapel Furman. Here, Kapel chats about the movie and his stunning SFX work.

HC: Is there a strong horror movie following in Brazil?

KF: Brazilian cinema, in general, comes and goes every ten years or so. Because our so called "film industry" is directly dependent on economic and political situations. So, we have to relearn how to be able to get a film done each and every time, and that applies to horror movies as well. Of course, in the past we had Jose Mojica Marins, our Coffin Joe, who did extremely important films, especially during the 60's and 70's. Now we have a lot of very creative filmmakers working with the horror genre here in Brazil, and that is because the technology to make movies became more accessible, allowing independent filmmakers to craft their movies without depending on big budgets. As for viewers, there is a lot of Brazilians who are horror fans, especially young ones, but we can say that "Brazilian horror films" are still a new thing for them.

HC: Where did the idea for Skull: The Mask come from?

KF: Initially I created the character in 2012 to be used in the TV show that we host (Armando, Raphael Borghi and I) on SyFy channel called Cinelab, it is basically a reality show where we make a horror/action short-film in each episode. Initially, Skull was just a crazy serial-killer, he was played by Raphael Borghi, that loves wrestling as much as I do, so his acting was close to that. I really liked the visual of the character, but at first it didn't have any background story. So, I decided to do an amalgam of pre-Columbian mythology. We have a vast number of legends and tales here in South America that are amazing, so, why not mix them? So, I studied not only history and mythology, but specially the aesthetics of art expressions from these cultures in order to properly redesign the mask. The idea was that the mask itself would be the main character, it would represent an entity called T'Uxlu who serves a god named Tahawantinsupay - The Entrails Collector of the Four Worlds, a pre-Columbian god. This entity is present in several Andean Pre-Columbian mythologies assimilated by the Inca Empire in the 15th century. Its name "T'uxlu" means Skull and it was mistakenly called Anhanga by the Brazilians Jesuits (who thought that any native thing was basically a demon, by Catholic standards). This mystical entity rests in the artifact that looks like a mask. The Mask has appendices like sharp-nailed fingers on top of its head - used for locomotion and to rip off three hearts and eat them before it can assume a host. (Spoiler alert: that is why it doesn't work in the first ritual). When the Mask possesses a human being, the host personality disappears, and the entity takes its place. The host turns into a supernatural serial killer and begins to perform visceral sacrifices, absorbing their guts and seeking to become the incarnation of its god, initiating a bloodbath filled with gore offerings. But maybe it is all an excuse for me to create a wrestling Heel mixed with comic books and 90's videogames.

HC: Was it based on any actual sort of myth or legend?

KF: It was based on that mix of myths and on the misconception of the Jesuits regarding what they assume that Anhanga meant. They thought that it was the Tupi version of a Death's Demon. They were very wrong, but it was quite a good legend to be inspired by. The real name of the entity is T'Uxlu, but no one can pronounce that, so I called it Skull. The Priest with the sword is based on real Jesuit priests that were together with the Conquistadors in the XVI and XVII centuries.

HC: How do you and co-director Armando Fonseca, work together? Do you each direct separate sequences, for example?

KF: I am not really good as a people person, I am not rude, I try to be as polite as possible, but I do recognize that I lack some social skills. So, Armando is great to balance that, especially dealing with the actors. Also, aesthetics and visual narrative is very important for me, and sometimes I can get too much inside my own world in the film, which is a very useful tool to create weirdness and SFX, but a film can't be all weird (well... I think it can, and that is my problem). So, everything is a matter of balance. To craft a film is a collective work of the whole crew. So, to me, a film is the result of everybody that works on it.

HC: You use some stunning natural locations, was it difficult to get permissions to shoot in such places?

KF: The difficult is not the permissions themselves but Sao Paulo is a huge city, and people don't care about the shooting of your film. The city will not stop for you to make your scene, unless you have enough money to close that location for the film and disturb the life of everyone, which was clearly not our case. For the permissions we have a film commission here called SPcine, and together with our line producer Thiago Freire, they were very helpful with that.

HC: Did it take long to get the design of the skull right?

KF: In this case, we were lucky because I had the opportunity to test the design several times in those short films. But as soon as I defined the background story and the mythology, I knew that I had to follow these rules, specially respecting (in terms of influence) aesthetic and materials from 600 years ago.

HC: The special effects are superb, which sequence was the hardest to get right and how much fake blood did you use?!

KF: Thank you very much! I am really glad that you liked. Luckily with the effects I worked together with Michelle Rodrigues, Israel Massei, Victor Daga and Jessica Monge doing the makeup and Konstantino Koutsoliotas doing the VFX, all of that with the production design of Lize Borba and the cinematography of Andre Sigwalt. The whole crew and the cast were great doing the FXs scenes, also we had the help of fighters from BWF (Brazilian Wrestling Federation) and the stunts from NoLimits. So things worked very well, especially because our biggest enemy was the time restraints. Things are easier when you have enough time and, unfortunately, we didn't have it. I really didn't count how much blood I had to make, but if you count the pool of blood, I would guess something like 1,000 litres. Don't forget that, by the end, Skull is covered in blood.

HC: It has some amazing set-pieces such as the sword fight in front of the stained glass, where did that sort of artistic idea come from?

KF: Thank you again! Most ideas were planned even during the screenplay development. Armando and I talked with Raphael Borghi, who did the post-production, and planned together what was possible and how to write and shoot that in order to have the right material for the post-production. Some ideas, though, came in the moment. For instance, since the floor of the church was flooded, the light was creating these reflections of the stained glass in the water. We saw that and thought that it would be a good way to shoot this scene. But, unconsciously, I think it is a mixture of influences like Highlander and the opening credits of Cowboy Bebop. And, I guess that applies to everything, it is the result of the amount of influences and references that we collected in life, sometimes it is more explicit and sometimes it is subtext. For instance, Francis Bacon, Simon Bisley and Sam Kieth, have a huge influence on how Skull is designed, but that would be under a first glimpse. I try to put different levels of subtext and interpretation in everything - which doesn't mean that everybody will get it, since it depends on each particular viewer. There are things that nobody notices, like the machete that is a reference for a macuahuitl, that is why it has those dents in the blade. Another peculiarity: every character has a Judas Priest song as an inspiration.

HC: Will you be nervous when the film has its UK premiere at FrightFest?

KF: Yes! Sure, of course! We did the film trying to be as honest and sincere as possible with what we like, and we can only hope to find others that will like it as much as we do. It takes so much time and effort to make a movie that there is no way that we can't be nervous.

HC: Do you think historical artifacts can contain such paranormal powers?

HC: So, what are you working on at the moment?

KF: A lot of new projects, but 2020 showed to be a little box of mysteries that is teaching us not to plan too much and to plan too much at the same time. So, I rather keep my projects in suspense until they happen. Nonetheless, I would love to turn Skull: The Mask into a metroidvania style videogame.