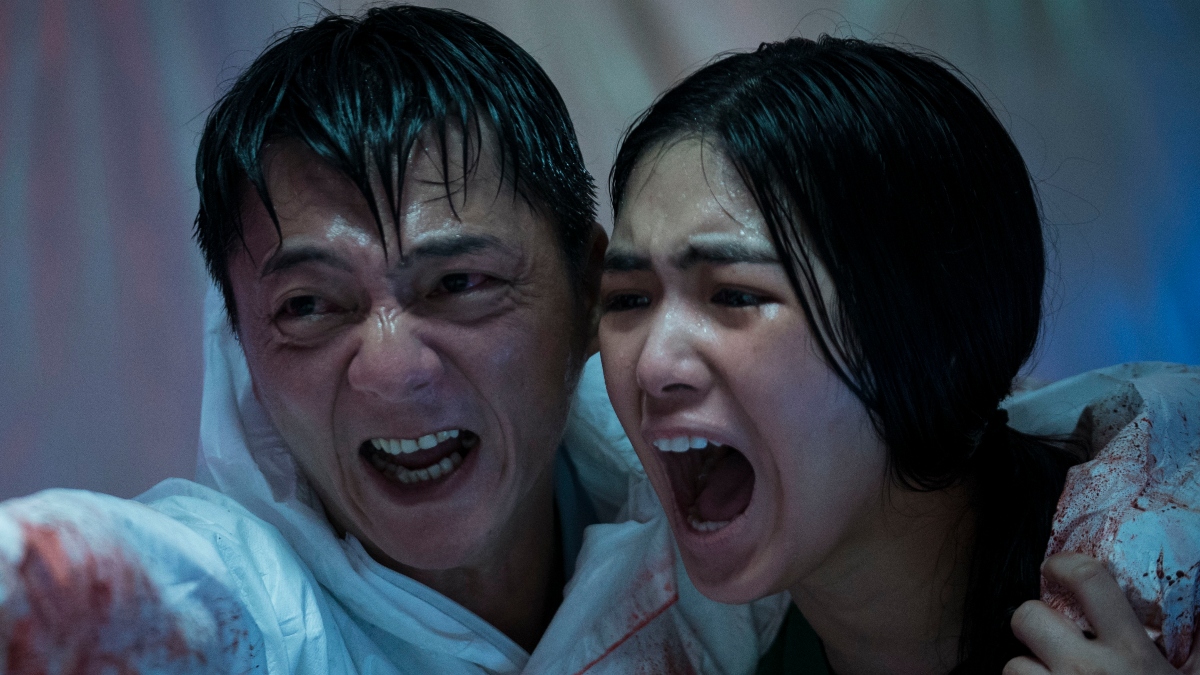 The Sadness review: A blood-soaked COVID-19 allegory that might break records on gore [Fantastic Fest 2021]

Last month, we had the chance to see The Sadness at Fantasia Fest but due to unforeseen circumstances called the coronavirus, the review was not able to be done.

As ironic as it may be that a virus interfered with a review of a film that speaks on the pandemic, nevertheless, we are dying to talk about this sledgehammer of a horror film.

This reviewer hates gore for the sake of it. Typically, films that relish in their lust for blood just turn this writer away. And then there is The Sadness.

The Sadness might be the goriest and most delightfully violent film one might see. That said, it has a purpose.

Here is our review of The Sadness out of Fantastic Fest.

The film mostly centers on Jim (Berant Zhu) and his girlfriend Kat (Regina) that live a mostly quiet life together in the midst of a pandemic.

When the movie begins, it’s very quiet and the morning is inconsequential. Kim has to get ready for work and they have normal relationship arguments. There are reports playing in the background while he scrolls social media about something called The Alvin Virus.

Similar to the current political landscape, neighbors and various media pundits are dismissing it as “the flu” while other medical experts are trying to warn of similar proteins that are commonly found in rabies. On top of these warnings is a caution about what might happen if it mutates. Sound familiar?

Jim drops Kim off at work which is when all things go to absolute hell. They do not become zombies. In fact, given the elements involved, if one had a choice, it’s a strong bet that most viewers would rather have zombies than fight the infected from The Sadness.

Random individuals all over the city become pure evil. Throughout the city, the infected do the worst things imaginable to anyone around them. This is not limited to rape--to men and women--, murder, torture, and anything else one can think of. And they do so with a joyous smile on their face while possessing the blackest of eyes. Bottom line, director Rob Jabbaz has envisioned hell cinematically and it’s just as bad as expected.

As stated, this is not a movie for the faint of heart. Even during its festival run, it is slapped with a trigger warning to ensure audiences are aware. The blood and torture are spilled and it never holds back on trying to mentally punch one in the face with its attempt to disturb.

But even though it has a thirst for blood, it is purposeful gore. The Sadness is a grisly violent allegory about the immoral behavior that coronavirus has caused for mankind.

We live in a world right now where most are willing to put selfish needs over protecting one another. And here, the infected--that this reviewer is going to label “the sad” – are representative of this form of selfishness only dialed up to the maximum volume.

Once we are forced into isolation to protect one another, people can change and become monsters. Sometimes we see the signs of this behavior lurking before it is triggered by a global chaotic phenomenon.

This leads us to The Sadness’ unexpected villain known as Businessman. This character brilliantly played by Tzu-Chiang Wang is someone each of us has met once or twice in our lives. He is the stereotypical lonely creep that never quite harasses but might as well with his resentful behavior towards women who turn him down. Well, imagine this individual to a violent extreme.

Tzu-Chiang Wang steals the entire film with this antagonistic villain and will remain one of the most talked-about stars in festivals going forward.

Outside of Martyrs, this reviewer has not seen a horror film that both delivers on intelligence and excessive violence in equal fashion. Because of this, The Sadness is a masterpiece in its own right but also might be a difficult rewatch for many.

All this said, if horror fans can stomach what The Sadness has to offer, this is an experience they may never forget.

For everyone else who cannot handle gore or extremely disturbing acts of violence, proceed with caution. Take this warning seriously because think of the cruelest and most viciously violent film you have seen and it is probably worse than that.

The Sadness at Fantastic Fest: Should you watch?

The Sadness is a bloodthirsty Covid-19 allegory that has a lot on its mind about selfish human behavior during pandemics.

In The Dark Knight, Heath Ledger says, “Madness is like gravity. All it takes is a little push.” And in today’s world, this has been proven excessively.

The film is the current situation we are all facing, in which not only do we fear one another, our ability to care for one another is pushed aside. Only here, it’s gift-wrapped in one of the goriest films ever made.

It’s an unforgettable film but view with caution.