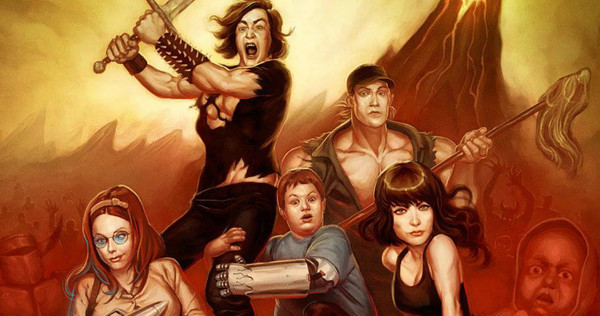 Todd and The Book of Pure Evil Animated Movie Teaser: The End Is Coming

Todd and The Book of Pure Evil Animated Movie Teaser: The End Is Coming

It's been awhile since we've heard about Todd and The Book of Pure Evil: The End of The End, an animated feature-length movie based on the popular Canadian TV show. The official Todd Facebook page has arrived with an update. And an animated teaser! It sounds like this movie might be finished this year. For now, we only get to see a quick glimpse at what's to come.

Todd and The Book of Pure Evil: The End of The End has been a long time , with a successful Indiegogo campaign coming to an end way back in the summer of 2013. The team behind the upcoming movie raised $124,000 from fans. But as it turns out, the movie needed an additional $750,000 to be completed and released in theaters. It took the filmmakers another year-and-a-half to find the proper funding, but as luck would have it, the Government of Canada stepped in to help see it through!

Telefilm Canada is supporting the theatrical release of this movie, which is said to be about 'sex, drugs, teen angst and exploding body parts'. Raven Banner Entertainment will distribute the film throughout the Great White North, but there is no word on whether or not will get to see it on the big screen in the States. The Todd Facebook is making these promises to fans who helped get the movie where it is today.

"We'll have WEEKLY UPDATES (at a minimum), with pictures, storyboards, and clips. Something for everyone! We'll have RESPONSES TO YOUR QUESTIONS AND RANTS on Facebook and Twitter. You'll get to witness the film being PRODUCED, ANIMATED and FINISHED this year, in anticipation of our LAUNCH IN OCTOBER 2016!!"

The animated movie will serve as the finale to the TV series, picking up right where it left off. It will drop fans right into a new hilariously inappropriate adventure for The Gang of Pure Evil. The entire original cast will return to voice their characters, and the movie is written by the same gang behind the TV show. Here's what the filmmakers want fans to do before October.

"Your homework while we finish the film this year? Rewatch the series, get all nostalgic for the late 2011's. Remember what life was like back then...Before the iPhone 5? Before Gangham Style? Before KONY 2012? Yes, those were the good old days, and Todd and the Gang were a part of it. And we PROMISE to update you WEEKLY, to give you pictures, Q&As, stories, and clips of what we're about to unleash on the world. You'll catch up with Todd, Jenny, Curtis, Hannah(?), Atticus, Jimmy and more as we finish and unleash "Todd & The Book of Pure Evil: The End of The End" this year!"?

The team behind Todd and The Book of Pure Evil: The End of The End is thanking everyone for their patience by debuting this awesome teaser. It's not much, but it should be enough to do the trick. So, who's as excited as we are that the Todd and the Book of Pure Evil animated movie happening this year? Sound off in the comments below.