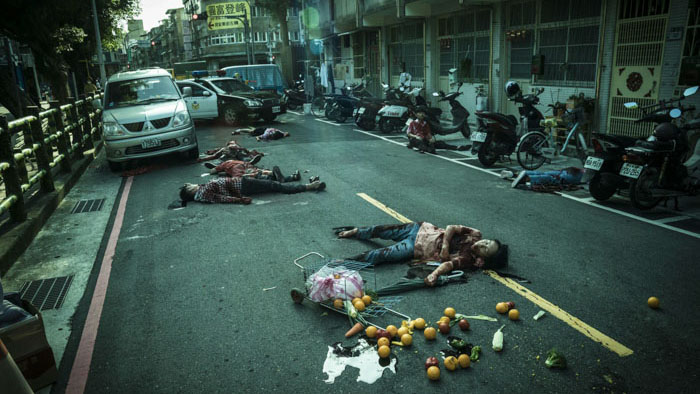 LOCARNO FILM FESTIVAL 2021 REVIEW! Holy f*****g s**t. Brace yourselves. Rob Jabbaz’s brutal, breathless Taiwanese horror splatter fest The Sadness is decidedly not for the faint-hearted. Beneath the piles (and piles) of gore, a heart throbs gently, a doleful soliloquy for humankind that strikes a little too close to home. Examining what happens when humanity is stripped bare and all that’s left is our raw resentment, our fury, our sadness, The Sadness will blow your f*****g mind… and then eat the scraps. You’ve been warned.

At its heart, The Sadness is a love story about two people trying to reconnect in a world gone mad. Kat (Regina) and Jim (Berant Zhu) are going through a minor relationship squabble. Jabbaz masterfully builds tension; we follow the couple through their morning routine, as things gradually unravel in the background. First, there’s a YouTube video about the mutating Alvin virus. Soon after – a neighbor with a cold. They witness an ambulance surrounded by bloody corpses. Jim drops Kat off at work, which very soon ends up being a terrible idea.Chaos sweeps through the city within a blink of an eye. Before Jim knows it, people go rabid, slamming each other with cars, stabbing everyone in sight, plummeting from rooftops. As he attempts to get back to Kat, she goes through several terrifying ordeals, barely surviving an ER room massacre, and ending up in the lab of a crazed virologist, hell-bent on using her blood to cure others. When the inevitable reunion does occur, well, it’s not what you’d call a romantic moment, exactly.

Allow me to reiterate: this film is some kind of genius, propelling ahead with a vicious force, full throttle, both embracing and disregarding convention. Fingers are sliced off. Necks get ripped open, tendons and all. A nose is chewed off. Boys on a baseball field beat another to death with bats, then proceed to do something too gruesome to describe. An umbrella penetrates a young woman’s eyeball, straight into her brain. A head explodes in the most spectacular fashion. A bloody orgy takes place, with all sorts of orifices plumbed. In case you’re wondering, there’s also infanticide. And that’s just the tip of this bloody iceberg.

The Sadness is not without moments of humor and poignancy, such as the scene of a desperate stranger trying to hit on Kat in a train (he becomes a major bit player later on), or when a rabid man exclaims, “I’ve never had a threesome before!”, or when a heartfelt “thank you” suddenly becomes the one bright inkling of hope in a world submerged into the murkiest darkness. Yes, it contains its share of gratuitous blood splatter, but The Sadness is not some cheap exploitation flick.First of all, it’s made with filmmaking finesse, elegantly structured, with a gorgeous electronic score helping to drive the narrative. Obvious allusions to the current pandemic resonate, skillfully avoiding the “overwrought” trap. “I find it very convenient that Alvin just decided to show up during election year,” a reporter is heard saying. Political implications aside, Jabbaz explores our penchant for violence, demonstrates how quickly we degrade into chaos, underscores the link between our two rawest primal instincts: to f**k and to kill. He demonstrates how prone to absolute self-destruction we are in the face of catastrophe. “We are slaves to our limbic systems,” a virologist explains, quite accurately. Like the film’s infected, we destroy things, and we weep as we do it.The Sadness is deeply frightening, and yes, sad, on multiple levels. Sure, there may be more zombie / “infected psychos” movies than there are words in this review. But in an era when so many filmmakers seem to hold back, this one sure as hell doesn’t.