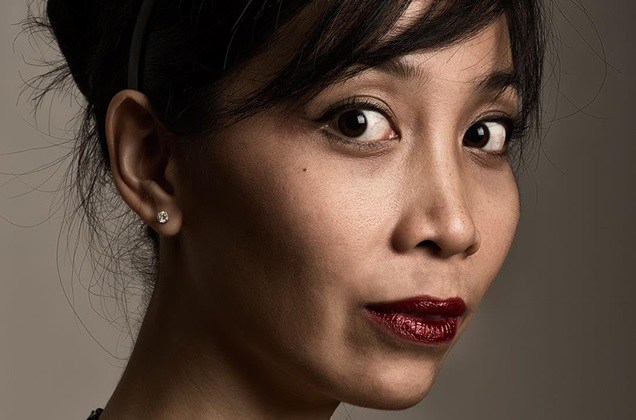 If you’ve ever thought about making a movie yourself but were never sure if it was possible, the below interview with Laotian filmmaker Mattie Do will absolutely give you the inspiration you need. Her first film, Chanthaly, was the first horror movie ever made in the country of Laos; and her newest ghost story, Dearest Sister, recently  premiered at Monster Fest in Melbourne, Australia.

DC: With Lao New Wave Cinema and all press you’ve received with Chanthaly and Dearest Sister, do you have any interest or opportunity to use your name to help promote other Laotian genre filmmakers?

MD: When I arrived in Laos, there really wasn’t much filmmaking going on. Lao Art Media had made a few films, but they were pretty much the only production company in town that wasn’t making little documentaries for development NGOs. I’d already started working at Lao Art Media developing Chanthaly when Lao New Wave Cinema shot Keola’s thriller At the Horizon, so that was almost a year before I started shooting Chanthaly. There are so few film people in Laos that we’ve all become really good friends. And we totally help each other out in any way we can, but usually in small ways. I did the English subtitles for At the Horizon, for example. And they lent me lenses for Chanthaly, and later they helped me find actors for Jamie M. Dagg’s River and we worked with one of their key team members on set for Dearest Sister.

I really wish there were more genre films in Laos to promote, but there really isn’t. I have a lot of people who say they want to learn, but when they see that learning with me involves sitting on the floor in our shorts and t-shirts, on a plastic rug in the dirt out in the blistering heat, reading and softly discussing things with my actors and eating papaya salad, the glamour seems to disappear. I guess it isn’t what a lot of them imagine from a film set.

DC: What is the main message of Dearest Sister, and what is it ultimately about aside from its initial premise?

MD: That’s sort of a question that I can only answer now in retrospect because I don’t really start my stories with a theme in mind… I didn’t set out to make a film about class issues or income inequality or interracial couples. I kind of had vague ideas in mind since I had been talking about doing a trilogy of films featuring Lao women, but it’s always quite vague at first.

I started out with an idea for the ending, a very strong image for the ending actually, and this strange Lao belief that spirits bring lottery numbers. It was also a strange thing that I really noticed and disliked frequently about Lao families in the city, their penchant for bringing in relatives from the countryside to work for them as household help. That fit perfectly, and it also introduced this idea of social class into the story. So through a lot of , and observation of what I was experiencing with life in Laos, we dug into the different aspects of Lao society, but also because it worked for the characters first.

The thing is I don’t want to be preachy. But I think that if I set out to create real Lao characters, then they are naturally going to express insight into issues that are affecting Lao people. If Dearest Sister makes people think deeper about family relationships or social classes or Laos in general, then I feel like they’re sort of taking the same journey that I took while I was developing the story.

DC: Living in LA for so long and then relocating, you were able to cause a cultural quake in film festivals because your story was so unique. If you would have stayed in LA, would you have even become a filmmaker?

MD: Well, I was born in LA, but my parents moved our family up to the central valley right before I started kindergarten. I was down in LA a lot because a lot of my Vietnamese family was still living in the Little Saigon or OC, but I wasn’t really in Hollywood and I was never romantic about making movies. I doubt staying in LA would have ever swayed me into doing anything like what I’m doing now. It wasn’t until after I’d gone to Fantastic Fest with Chanthaly and met so many incredible people that I actually sort of sat down and really thought: Do I really want to do this again? And I did.

DC: If you would have set out to make a romantic comedy in Laos, it wouldn’t have had the international appeal. Were you shocked by the response from the genre film community that accepted your first film and Dearest Sister as well?

MD: When my husband sort of tricked me into directing Chanthaly, he was adamant from the beginning that I was going to make a horror film because the genre community is, in his words back in 2012, just “the best audience ever.” Plus, we both knew that being scared was a pretty universal feeling!

So when we started Chanthaly, he asked me, “What story do you want to tell?” And I didn’t know. I’d seen horror movies but never thought about them much after leaving the or turning off the TV. But I’ve always been a big fan of ballet. When my husband and I first got together, he had no interest in ballet. So to get him interested, I started telling him ballet stories as genre pulp. “La Bayadere” as a murderous and vindictive ghost story, “Le Corsaire” as a swashbuckler, and “Giselle” as a ghost story with zombies. Anyway, the first answer I had after he asked that question was I want to make “Giselle” as a Lao ghost story.

I never know what people are going to think about my movies, and to be honest, I think there’s a good argument that neither Chanthaly nor Dearest Sister horror films. Not in a traditional sense. So I sort of just cross my fingers and hope there’s something there that people respond to positively. I also think it’s really amazing that festivals like Fantastic Fest and Monster Fest create these spaces where I can just talk to people about my movie.

DC: Do you feel, in a way, that Dearest Sister is your first film that you can experiment with more and expand on themes from Chanthaly?

MD: All I really knew when I first decided to make another film was that I wanted to bring back Newt (Amphaiphun Phommapunya) because she was so good as Chanthaly. And I’d just met ( Phetmany) and thought that she would be a great actress. So I knew my second film needed to have two strong central female characters. I thought I could raise more money for the second film, so I wanted to get out of the house and into the city. And when people asked me in the Chanthaly festival Q&A’s about what I was doing next, I’d sort of been bullshitting this answer about making a trilogy about the place of the Lao woman in her family, in Lao society, and then finally in the international community. So I’d sort of put myself in this position where I felt like I needed to make that second film. But I didn’t know exactly what that movie was going to be. Dearest Sister started out with the ghost story, the lottery numbers, and this idea for the ending. And yeah, I actually do have an outline for the third film in that trilogy. It’s a cool human trafficking story, but it’s not the next film I’m working on. I’ll get to it some day, though.

DC: Dearest Sister really seems to be more about the evil lurking in the living instead of the dead. Would you agree with that?

MD: Definitely. I really wanted Dearest Sister to be about the relationship between these two girls. A lot of ghost films, including Chanthaly, revolve around this question of trying to figure out what the ghosts want from the living, and I wanted to steer away from that since I felt like it would take too much focus off the girls. So the ghosts in Dearest Sister aren’t the focus of the story, and I tried to have the characters avoid even asking the question of what the ghosts might want. All they want is to straight up deliver lottery numbers to the living. That’s a real Lao belief, by the way, and variations of this sort of haunting show up all over Asia.

DC: At this point, even though you’ve said you accidentally became a filmmaker, your two films have commented about the socioeconomic limitations in Laos and how difficult it is to spearhead a real film community there. With Dearest Sister and your next film, are you wrestling with inserting subtle social commentary with good old-fashioned genre storytelling? In other words, do you feel a responsibility that’s getting in the way of just making a movie you’re passionate about without thinking of the repercussions?

MD: Well, like I said, I don’t really start out thinking about the social commentary. I really just want to create interesting characters and a good story, and then as the social aspects sort of naturally manifest, I go with it if it helps the story and if it’s something I’m observing and seeing in my everyday life in Laos. But I don’t really have an agenda. I’m not trying to communicate some coded message out to the world. So the social commentary isn’t the starting point; it’s more something that I figure out along the way.

DC: With the spotlight that festivals have provided and now the platform of Shudder, Dearest Sister is available to view in so many ways! When will you start to think about making a film in an environment that is not as prohibitive?

MD: I absolutely need to say that making films in Laos has really grown up over the last couple of years. I really like working here. I’ve talked before about how Chanthaly was initially rejected by the Department of Cinema because Marxists don’t believe in ghosts, but Dearest Sister didn’t face the same resistance at all over the supernatural elements. I think that back in 2012 the Lao government was still trying to understand the impact that Lao film might have on the society, and honestly, there was no way for them to know. There had only been half a dozen Lao films. But the more experience they have with the filmmakers here, the more open they are to further production.

Who knows? But, I’m not just a Lao girl that wants to only make films about Lao girls and ghosts. I’m a director who wants to make films. My next film, The Long Walk, is about the problems of uneven development in the third world, the difficulties in forcing a Western solution on Asian problems, the impact of isolation and deeply internalized regret… and a time-traveling serial killer.